The Risks of Legalized Marijuana

The Risks of Legalized Marijuana

Legalized Marijuana Comes with Risks If Not Used Responsibly

As more states legalize marijuana for medical and even recreational use, it becomes much more important to educate those in legalized marijuana states on the effects of the drug. At Primo Prevention, we aim to minimize the number of people who abuse an addictive substance and one that is mentally damaging through education.

If you are an educator or healthcare professional who would like to teach others about consuming legalized marijuana, be sure to order our educational materials and promotional products regarding marijuana use.

Legalized Marijuana Is Not Safe for Everyone

The most common argument people make is “if cannabis is considered a harmless substance, then it’s safe for anyone to consume.” However, that is not entirely true. In fact, this is a very common misconception. It is true that people are far more likely to die from an opioid overdose than a marijuana overdose. However, that does not mean that consuming a large amount of cannabis comes with zero consequences.

Marijuana, even purchased at a reputable dispensary, is still a psychoactive drug that affects the way a person’s brain and nervous system work. It alters the user’s mental and physical state. If it is consumed without discretion, a user could end up harming themselves or even others around them.

Those who have a psychiatric illness or have a family history of mental disorders such as schizophrenia should especially avoid marijuana. The National Institute on Drug Abuse states that those who currently have symptoms of psychosis or are at risk to develop psychosis could worsen their current mental state if they use marijuana. So, just because marijuana is legal in your state, this does not mean it’s safe for everyone. 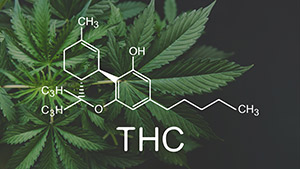 Be Aware of the Dosage That You Are Consuming

Edibles and vaping devices (also known as dab pens) have become increasingly more available for users to buy as an alternative to smoking a traditional blunt or from a pipe. As harmless as a brownie or gummy bear might seem, both edibles and dab pens are packed with more THC than a person might be prepared to ingest.

THC, or tetrahydrocannabinol, is the chemical in marijuana that causes its psychological side effects. Common side effects of consuming marijuana with THC include:

The more THC a cannabis product has, the stronger the effects, which can turn a good time into a visit to the hospital. Before buying the strongest strain or edible at the dispensary, be aware of your limits, and do not take more than you should. For edibles, this is the most important thing to remember. An edible can take up to three hours until you feel the desired effects, so do not eat more just because you do not feel any immediate effects. Talk to your doctor if you have any questions or concerns.

Just like drinking and driving, being under the influence of marijuana behind the wheel is dangerous. Although it may be legal to buy and consume marijuana in your state, DUI/DWI laws in every state mention that it is illegal to be high while driving. Even if you are parked in your car while high, an officer can still charge you with a DUI. A person is considered to be legally in control of a vehicle if the person is sitting in the driver’s seat at the time the police first approached them.

The laws are set in place for the safety of the person who is high and the others around them. When a person is high, their motor skills and reactionary reflexes are impaired. This increases the risk of driving carelessly and even dangerously. According to the AAA Foundation, the amount of marijuana-positive drivers involved in fatal crashes doubled in a year after the recreational legalization of marijuana in Washington. If you are under the influence of marijuana, do not get in the driver’s seat for the safety of yourself and other drivers.

Marijuana Should Never Be Given to Adolescents

Legalized marijuana is still illegal for people younger than 21 to consume, but that does not stop them from finding ways to access the drug. you have legal cannabis products in your home, it’s important to make sure that they are not accessible to anyone under the marijuana consumption age.

Marijuana damages the hippocampus, the part of the brain responsible for retaining memories. For adolescents, the effects of consuming marijuana are more harmful and even permanent. Our brains are not fully matured until our mid-20s, meaning that the brains of teenagers are still in the developing process. The damage that marijuana causes on the brain is irreversible, even if the person chooses to quit using later in life. Moreover, studies found that teenagers who frequently used cannabis compared to those who didn’t, were more likely to:

Safety is the number one concern when it comes to consuming legal marijuana. To prevent more accidents and incidents caused by marijuana, start educating others about the effects of marijuana today.

What is Depression? Learn About the Symptoms, Causes, and Treatments
Next
Adderall – A Shockingly Unsafe Drug

Using Marijuana While Pregnant is Dangerous

With the legalization of marijuana becoming more popular across the states, more women are smoking while pregnant, risking not only their health but their child’s health and development as well.